The Intro:
Buying a new car is stressful for anyone, especially when many people believe sales people and dealerships are often times working towards confusing the buyer into believing a deal is great, all the while, disguising an excessively profitable deal for themselves.  And, while I do not think a dealerships should be stuck with an unprofitable deal, an honest upfront, "it can't be done for that low of a price," would go so much further with me than being caught in a manipulative lie.  Well, I believe I caught the lie just in time. 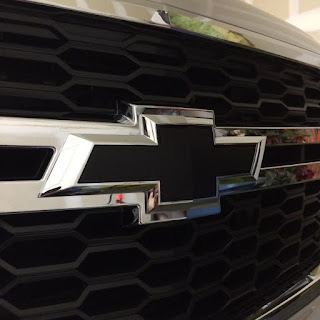 Saturday 06/13/15, my wife and I, with our two boys, spent over 4 hours at Kuni Chevrolet in Sacramento, CA, working out the details on a lease we believed was for a Chevy Tahoe LTZ.  And, while the vehicle we were negotiating the deal around was not at Kuni on that Saturday, it was a short distance away, said to be coming from a dealership in Milpitas, CA.  An agreement was reached on a Silver 2WD LTZ with a rear seat Blue-Ray/DVD system, second row bucket sheets, and a whole bunch of other features, including our favorite color. We completed some paperwork, which included a VIN number (ending 639176) for, what we believed, was our future LTZ model Tahoe, with delivery planned for Monday, 06/15/15.

On Monday, my wife and I each made calls to Kuni late in the afternoon, looking for information on the vehicle's arrival, as we needed to arrange getting to the dealership to take delivery and provide our down payment.  Eventually, we were called back and told "the bad news," by our salesman, that "the Milpitas dealership sold the vehicle right out from under us".  He went on to say he and his manager yelled at the other dealership about professionalism and fulfilling commitments, and he assured me he was looking to locate another LTZ with all the same specifications we'd agreed to originally.  It was at this point my wife decided to use Google and look-up the VIN to locate this dealership in Milpitas.  We'd hoped to contact them and find out more information on how they could have sold our Tahoe to someone else.  But, the Google search resulted in a hit at Kuni Chevrolet in Sacramento.  I thought it was odd, but believed perhaps it had something to do with the transfer happening over the weekend to Kuni.  Perhaps, Milpitas sold it early Monday morning.

On to Tuesday and Wednesday, which went about the same as Monday, with different salesmen getting involved with the vehicle search for us.  One salesman even sent specs with another VIN for a vehicle located in Fresno.  But, that one too was sold before we could get it up to Kuni, and other Tahoes were also "sold right out from under us".

Then, Thursday evening came and I received a call from our original salesman.  He'd located "the perfect LTZ Tahoe in Southern California, with the cocoa dune (light tan) interior, just as we'd always wanted."  Although we'd always planned on gray or black in an LT model, we'd discovered gray wasn't offered in the LTZ models Kuni had been working to make the deal on.  My wife felt she'd be satisfied with the tan, as it was a lighter, cooler color for the hot sunny days, but we wanted to see it in person first.  The salesman told us they were going to put someone on a plane to Los Angeles and have the truck delivered to the dealership on Friday.  Skeptical at this point, I told him to call me when it arrived.

And Friday night, 06/19/15, at about 4:45pm, I received a phone call from the salesman.  He said the vehicle had arrived.  He told me he was sending it to be detailed and he wanted to know what time we could be down.  I told him we'd come look at it after I got off work, at approximately 6:00pm.

As we pulled into the dealership later that evening, we saw the Silver Tahoe and we initially got excited.  We looked it over, reviewing the interior color and other required features.  We then went inside to sign corrected paperwork, with the new vehicles VIN number.  For our troubles, I expected they may have even sweetened the deal.

We were introduced to a new (new to the dealership and new to us) finance guy.  Since the deal was already established, I expected it to be a quick signing process.  But, when the finance guy pulled out the new paperwork, I immediately looked to the overall cost and saw an increase of approximately $900.00 in price.  "Not to worry," said the salesman, "your payment is still the same".  I reviewed the paperwork again for where this increase was going to appear, and it had been placed into the residual value (the amount the truck will cost if we buy it out at the end of the lease, or the value it needs to be worth if we decide to sell it private party).  I explained I wasn't happy with this.  After all the issues, the deal should have been, at minimum, the same deal we'd agreed to on Saturday, a week earlier.

AND THEN ALL HELL BROKE LOOSE.  My ever racing mind put together the following facts and connected, what I believe, was a complete manipulation of the truth to lock us in with the Kuni dealership.  Based on my experience in sales, pricing, finance, and with my training in reading people's body language, interviewing and interrogation skills, I quickly put together what I believe happened back on that first Saturday.


The Facts That Quickly Took Shape in My Head:

1.  Kuni Chevrolet did not have any Chevy Tahoes on the lot besides a blue LS (base) model, unless they were incompetent in finding others when asked about the specific LT model showing on the Kuni website.  We were eventually told, the one on the website "must be in transit."

2.  While working on pricing and payment for leasing an LT model Tahoe, the salesman presented specifications for several different Tahoes that closely matched what we'd laid out, but were never exactly right, as they all were either missing a feature or two, were the wrong color, or were found to be unavailable at the other dealerships.

3.  Upon stating I needed to go, but would return once one was found matching our desires, the salesman asked for another minute.  He left and came back with an LTZ model (a model above the LT we'd initially designed) and he managed to make it work with a relatively attractive lease deal.

4.  After reviewing the documents and the designed down payment, monthly payments, and residue value, we agreed to sign for this LTZ model vehicle.

5.  The finance guy created paperwork for the deal and included a VIN number we later Googled and found as an LS at Kuni.

6.  We were told our LTZ was "sold out from under us," by a dealership that was supposedly in Milpitas, CA.


The Realization of The Facts and What I Believe Happened:

While sitting there on Friday, realizing they were trying to make an additional $900.00+ out of the deal, hiding it in the residue to keep the payments the same, I connected the original VIN's Google Search results, to the blue LS model still sitting out on the Kuni lot.  I then surmised there was never an LTZ from Milpitas on it's way with the original VIN used on the GM Financial Leasing form and the CA DMV 262 form we signed.  Instead, I believe the original deal was made without an actual LTZ model located, but rather Kuni fabricated this deal and unmatched VIN for the purpose of running our credit, locking us into a deal with them, and giving them time to find a vehicle they could actually make a relatively similar deal on.


Why I Believe There Was an Ethical Issue Here and The Aftermath of My Rage:

I sent the new finance guy out and called for the original finance guy and our salesman to confront them both.  With prior conversations and all the facts, I put together my mental interview notes and decided to go straight into interrogation mode.  When the original finance guy and our original salesman arrived, I told them I knew what they'd done and I could not believe they would try to manipulate me like that.  The finance guy's immediate reaction, one of self preservation was to pull the file in toward himself as a way of protection.  He then got indignant and frustrated and said, "oh you think you've got us figured out, do you?" I explained, I did and his reactions was my proof.

I explained, my belief was the original LTZ model from Milpitas didn't exsist and because Kuni couldn't find a vehicle that matched our desired specifications, they manufactured one for the purpose of running our credit.  I explained, I believed the VIN used was to the LS model on the lot because they needed a VIN for the paperwork, which I told him I wanted back.  I explained I needed the originally signed DMV 262 form and the originally signed lease contract.  He refused and said they were his file copies and I couldn't have them.  I told him, I wasn't going to allow an ink signed contact and DMV form to be left intact on a vehicle I never agreed to purchase.  He then said, "it was a simple typos," pulled the forms out, and ripped them in half.  He then angrily threw them on the desk and left.

The salesman pleaded with me to give them a second chance.  I told him to go get the original features list and VIN for the Milpitas LTZ Tahoe.  He couldn't produce it.  Even after searching for several minutes, a saleswoman involved in the original negotiations came with a piece of paper and showed me a list of VIN numbers, one without a sales date and said, "see, it's right here."  I explained to her and the salesman that she was showing me the same VIN for the blue LS...AGAIN!  The salesman told her, "you are doing the same thing the others did."


So, we left the dealership.  We eventually went to a different dealership and bought an LT model for about $9,000.00 less than the LTZ.  We filed a case with GM, but "GM doesn't get involved with sales disagreements," even though this is an ethical issue, from my point of view, not just a sales disagreement.  The operator told me, she had "checked with her resources and this wasn't something they'd get involved in".  She did tell me if I gave her my new VIN, she could offer On-Star for a couple years, but that service is crap.  Kuni was supposed to reach out but never did.


One more point:  There is no dealership in Milpitas, CA.  This may be where the train stops to drop off the inventory of new Chevy Tahoes for Northern California, but there's no dealership.  The fact that ethics in car sales is always a question in people's minds, makes me so angry.  I've been a car nut for years, but the industry is so corrupt.  I hate that I bought a GM product after all the bailout BS, but it's a superior SUV to the rest.  And the fact company wasn't willing to look at this issue for what it was, an ethics issue not a sales dispute, makes me more disgusted with my purchase.  There was no dispute with the original sales deal.  I actually think it was an amazing deal...too amazing perhaps, and Kuni couldn't live up to that deal.
Posted by James Guhn at 4:36 PM No comments: