The Lemon Law - For Houses

I want to start by saying, my house was built by Centex. Great layout. Horribly built. Don't buy Centex. Buy property and have my dad build you a house. That's my next plan. The "Lemon Law", from what I know (and that's not much) applies to poorly made or maintained automobiles that are sold to an unsuspecting consumer. I know of a deputy I used to work with who was going to use this law to get rid of his Chrysler 300. And of course that could lead us into a conversation about how poorly build Chryslers are, but that's not where I'm going with this. I've also heard stories of private parties selling cars with major issues and not disclosing them to the buyer. The buyers were able to successfully sue the seller. My house is making me want to look into a "Housing Lemon Law." I bought my house in November of 2004, almost 4 years ago now. I've had so many little issues from pipes breaking to electrical to my water heater going out several times, that I'm ready to blow this place up. The windows are cheap and thin, letting in weather and noise as though they were open. The insulation doesn't stop the upstairs from heating up to temperatures where the A/C runs almost constantly to keep it between 80 and 85 degrees (I personally like 72 to 74). My refrigerator stopped working. I thought there was a problem with the fridge since the ice maker's had issues since we bought it. No. The plug stopped working. So did the plug my computer was plugged into in the dining room. So did the Christmas lights plug on the outside of the house. The downstairs shower only had cold water. The toilets don't flush well, and two of the four have needed new hardware in the tanks to stop leaks. Two bathroom sinks have running faucet issues. You have to know the right angle to turn them off so they don't run with a steady stream of water. Originally, the HVAC unit didn't work. When the technician came out to fix it, he found it was not hooked up correctly and a the circuit board was fried. I saw the blackened board myself. The oven continues stop working. Usually a breaker switch off and on will fix that. The paint on the walls is bad. In the right light, which is hard with the poor lighting the house has, you can see where a lighter coat was applied and where the sheet rock is still almost visible. I'll stop there. I'm sure you get the point. What doesn't help is the $210,000 I'd be short if I sold my house right now. The same model in my neighborhood, one with a pool, just sold for that much less. This is a bad time in the housing market. The bailout and all the housing programs don't really help someone who tried to do things the right way. I fixed my loan rate. I didn't get crazy with the upgrades. And, at the time, we were both making great money. We also planned to sell it in 2006. POP! The bubble burst and we didn't get any interested buyers for the 2 years we had it on the market. So, Centex is a poor quality builder. My house is worth almost half of what I paid. And I'm stuck. Lemon Law? Probably not. Oh well, this venting does help. Oh yeah, the reason I wrote this was my desktop. I moved it from upstairs to down stairs. The network Cat5 in the new room doesn't work. BLAST!!!!!! I had to spend $50 to get a new wireless PCI card so I could connect wirelessly to my home network and the Internet.
Posted by James Guhn at 8:23 AM 1 comment: 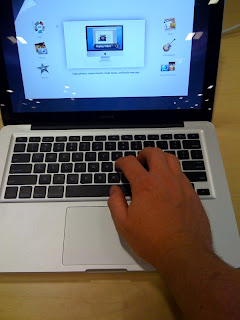 10 seconds after touching the new MacBook I already have a problem. My
hand rests on the touch pad, clicking the mouse as I try to type. Lame!
Posted by James Guhn at 4:23 PM 2 comments:

I remember singing this song for fun at my high school church group. It wasn't meant for anything spiritual. It was just something fun to do.
Of course, time moves on and other artists try to recreate the hype of this classic. Michael Bublé (I think I'm suppose to put that thingy over the e or it's Bubble) did this version. AWESOME!!! Areosmith's version, not as good.
Posted by James Guhn at 6:38 PM 1 comment:

It's the Simple Things 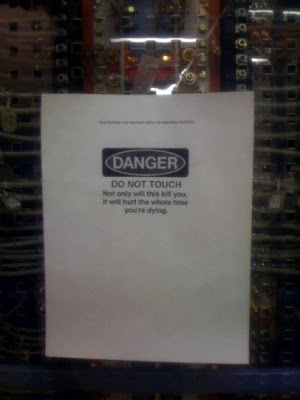 This is a great sign. "DO NOT TOUCH. Not only with this kill you, it will hurt the whole time you're dying."
Posted by James Guhn at 2:46 PM No comments:

Email ThisBlogThis!Share to TwitterShare to FacebookShare to Pinterest
Labels: Funny

Boot Camp for the iPhone

This is cool. The only reason I actually posted this video is the interviewers condescending questions near the end of the video, something like, "Don't Norwegians have girlfriends?"
Posted by James Guhn at 8:01 AM No comments:

Autoblog is reporting that GM and Chrysler are in talks about a possible merger. Looking for art work to go with this story, I found this one from February 2007, when rumors were circulating of GM's possible take over of Chrysler after Daimler decided to cut their losses and run.

I'm not really in the mood to talk about my thoughts on the possibilities of General Mopar becoming the next big automotive story. GM is already the world's largest automotive company, with huge cash flow issues. Right now, they're in the news trying to sell there HQ for $500 million. They bought it 5 or 6 months ago for $626 million. There's a quick $126 million loss. (Glad I don't have stock with those idiots.) They're also talking about unloading other divisions, like Hummer and their medium-duty trucks. GM could benefit from the Charger, Challenger, and other cool cars like these that Chrysler (Dodge) would offer them. GM could get back into the Taxi/Cop car business. It can't be a bad thing to have a big car that is purchased in bulk by huge agencies like the CHP or New York cabbies. Anyway, I don't get it. Why do companies that get so large lose site of smart decision making?
Posted by James Guhn at 8:21 AM No comments:

I saw Dan Ray do this first and I blew the quiz off. Then Ted did it too, so I had to try. Hmmm. Looks like I won boys. But we have always known, Jimmy the Gun is tough as nails. He'd take a bullet for anyone worthy (that's my wife and kid). Here's my score card. I could survive for 1 minute, 38 seconds chained to a bunk bed with a velociraptor

This is a sad news day. Watch these ads and think of times you enjoyed the various cookies from Mother's. See the article at SF Gate
Posted by James Guhn at 8:19 AM No comments: 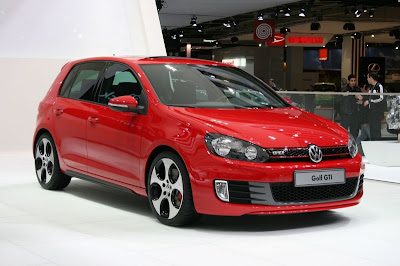 Some nice shots of this great looking vehicle. I want a GTI. UPDATE: Autoblog is calling it 2009 not 2010.
Posted by James Guhn at 9:01 PM No comments:

There were some rumor floating around about VW working on a truck. Code named the "Robust", the mock-up photos of a VW truck were not great. One website posted this horrible picture:

It's possible the real pictures have now been leaked prior to the trucks suspected reveal at the Paris Auto Show. If these are real, they're pretty decent. It reminds me a little of the Honda Ridgeline, but I'm a VW lover so this one looks better to me. All that to say, there are no specs or a name for the truck. In fact, I'm still not sure this is the real deal. 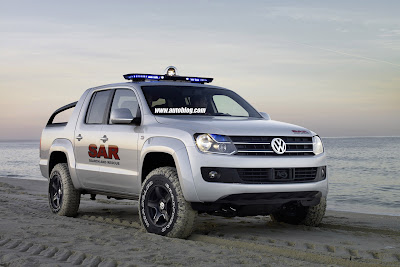 I'm not really even looking for a VW pic-up as my next vehicle purchase, but it's fun to look at concepts and possible future vehicles. Anyway, I found this one and a few more at Autoblog.com
Posted by James Guhn at 10:55 PM 1 comment:

"Hey, did you make sure the tractor-trailer we are about to right has the e-brake on?".....""What do you mean they don't have e-brakes?"
Posted by James Guhn at 10:37 PM No comments: 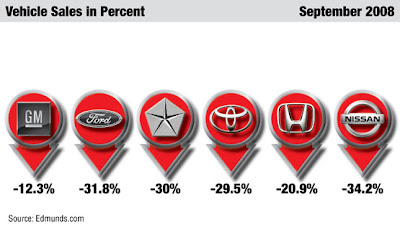 Then, you'll notice VW is not on the chart. VW is only down 9% from last year, the smallest loss in the auto industry. Nice. Check out the list at Autoblog.com And now, back to family time.
Posted by James Guhn at 7:27 PM No comments:

Ephesians 6:21-24 is Paul's closing the the people of Ephesus. He tells them he's sending Tychicus to tell them about how Paul and his ministry are going, and so he can encourage them. Paul then concludes with "Peace be to the brothers, and love with faith, from God the Father and the Lord Jesus Christ. Grace be with all who love out Lord Jesus Christ with love incorruptible."

We have no idea of the battles Paul and the early church faced. We have the freedom worship God. We have established churches where we can go together and corporately gather to learn from God's word, praise God with fellow believers, and grow in faith. Paul offers comforting words to the church at Ephesus to encourage them to continue in their faith. He offers them peace and love with faith from Jesus. He reminds them of the grace that comes from the love of Jesus and how incorruptible that love is.

Posted by Unknown at 7:05 AM No comments: