Apparently, you don't want to be a purse snatcher in this neighborhood. People with cars will run you down. And other people in the area will come flying out of the darkness to beat you down after you are run over.
Posted by James Guhn at 10:37 PM No comments:

Posted by James Guhn at 7:47 PM No comments:

Email ThisBlogThis!Share to TwitterShare to FacebookShare to Pinterest
Here it is, my first SMS post. Crazy how technology works.
Posted by James Guhn at 12:18 AM No comments:

The Ford Fiesta Could Be My Next Car...

After seeing this: Techy-Guy-Ted a.k.a. techyted and I got to drive the Ford Fiesta at the Sacramento Auto Show, and both of us had a blast. We were allowed to drive it hard, fast, and wild, just like Jeremy Clarkson. Both of us even tried e-brake slides. Plus it has Sync.
Posted by James Guhn at 10:02 PM 3 comments:

Woz Understands How To Make The Leak Fun 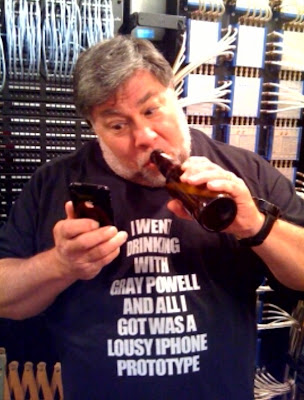 In GM's newest ad, they want you to believe they paid back all the money they owe. While they may have paid back the federal loans, they are still about $45,300,000,000.00 short of paying back the American people. On top of that is the $20,000,000,000.00 that was wiped in the bankruptcy process. If you can't tell with all those zeros, both numbers are BILLIONS of dollars. According to David Kiley with AOL: Prior to today's (4/21/2010) announcement, GM owed the U.S. government $4.7 billion and the Canadian government $1.1 billion. The U.S. government invested a total of $50 billion in GM to get the company through bankruptcy. Besides the debt, the U.S. holds $2.1 billion in preferred stock and stock warrants for a total 61% stake. The U.S. also aided GM with more than $20 billion more before the Chapter 11 bankruptcy to keep it afloat, but that money is not expected to be paid back. See the rest of his article here. The Truth About Cars says this. Don't buy what GM is trying to sell you in this commercial. They still took close to $100,000,000,000.00 from the American people. BUY FORD! **UPDATED** Autoblog added this today.
Posted by James Guhn at 11:44 AM No comments:

Quick question, what is wrong with my blog that Google sends this ad to me? (click on the image to enlarge)

Posted by James Guhn at 9:34 AM No comments:

Apple is Greedy. Must Be Run by Liberals.

I think that Gizmodo made some bad choices, but Apple, Inc. is just a big jerk about the whole leaked 4th Generation iPhone thing. Apparently, some sort of police investigation is under way. Whether that means Apple filed a crime report or not, I think Apple should use this as a marketing opportunity, instead of another attack on the people. See the story at TUAW. And because I think this is a well written article, take a look at the TUAW's post about the potential crimes and suits that could be filed against Gizmodo from Apple, Inc. and The State of California as a result of the leaked 4th generation iPhone. 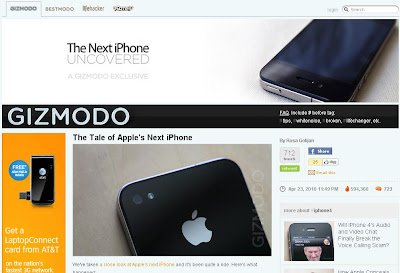 Fox's Glee is the work of a musical genius. The singers, musicians, arangements, performances, quality, and quantity of music done on the show by the actors is so great. Here is a music video of the cheerleader's coach Sue Sylvester, played by Jane Lynch, doing Madonna's Vogue. This is so great. As in 80's and 90's kid, I loved Madonna and enjoyed the music from this episode of Glee called, "The Power of Madonna." The Sue Sylvester character is a great one. Just a taste of Sue's "personality":
Posted by James Guhn at 10:24 PM No comments:

The 4th Generation iPhone is a Drinker

Apparently, the 4th generation iPhone was left at a bar in Redwood City. I don't usually jump on the band wagon about theorized future products, but this one is about the next iPhone, and I need a new one because mine is too slow and LAME! Check out the full story at Gizmodo. Check out the full story about the guy who may have a hit out on his life from Steve Jobs because he left the 4th generation iPhone at a bar at Gizmodo too. Like they said on Gizmodo, "it's just a !@#$ing iPhone", so I too hope the guy doesn't lose his job. I did end up jail-breaking my iPhone, but I restored it because it's too darn old and slow. I think if this thing comes out in July I'll get one, and I'll try to sell my 3G. We will see. If this is the next iPhone, I love it. I'll be super glad they changed the form factor of the phone. I think it's time. Good luck Gray! Here are some photos in case Apple asks Gizmodo to pull them down, and they do. 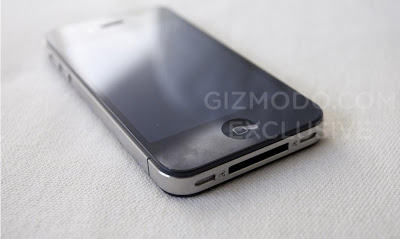 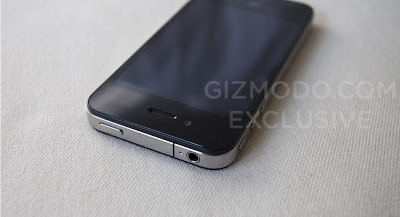 Posted by James Guhn at 7:09 PM No comments:

Posted by James Guhn at 5:23 PM No comments:

Email ThisBlogThis!Share to TwitterShare to FacebookShare to Pinterest
Labels: Food and Beverage 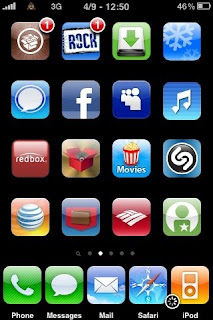 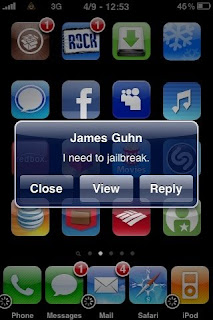 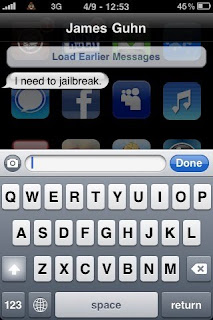 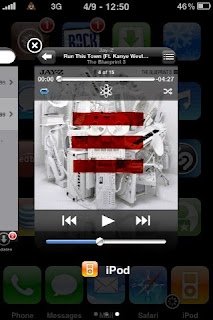 Apple announced the 4th major update to the iPhone software. Things like multi-touch, in app SMS, folders, etc. were added in this update. But, who cares? It sure isn't the jail-broken iPhone users. They've already had all these features and more. And they have them without the Apple restrictions. These are a few pictures I got from a friend with a jail-broken iPhone. These pictures show off: Multi-tasking In app SMS 5 icons on the dock He even changed the carrier name to the picture of a pile of poo (to represent AT&T's amazing service) Other things not pictured include: settings quick access free app download changing wallpaper reading and replying to SMS texts while the phone is still locked current status of an app shown by the spinning "working" icon quick location update and so much more the OS 4.0 is not offering. And the best part, it all works on the older generation iPhones.
Posted by James Guhn at 6:34 PM No comments: