I know there are more names for Marijuana than I put in my title, Green Bud is another quick one, but this is a quick post about the bags of nature I got off a trio yesterday.  A friend of mine is a police officer in a nearby city and I went on a ride-a-long with him yesterday.  I needed to be out there and feel the rush again.  It was fun.  We made an arrest for, what seemed like a ton of marijuna.  In actuality, we got just over a pound off the suspects. 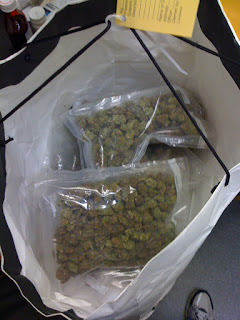 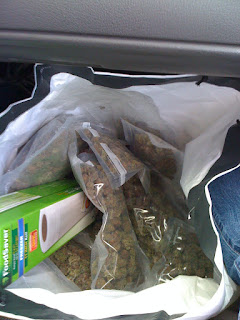 I got to pretend I was a correctional officer a bit too, running jail cell doors and helping fill out property forms back at the PD.  We had other contacts too.  I "help" a guy we contacted make the right decision to not run, by getting out of the car just as (what I perceived was) the thought of doing so was forming in his head.  I also laughed when another guy thought it was okay to ride his motorcycle with a sawzall on his lap.

But mainly, I wanted to show off the weed.