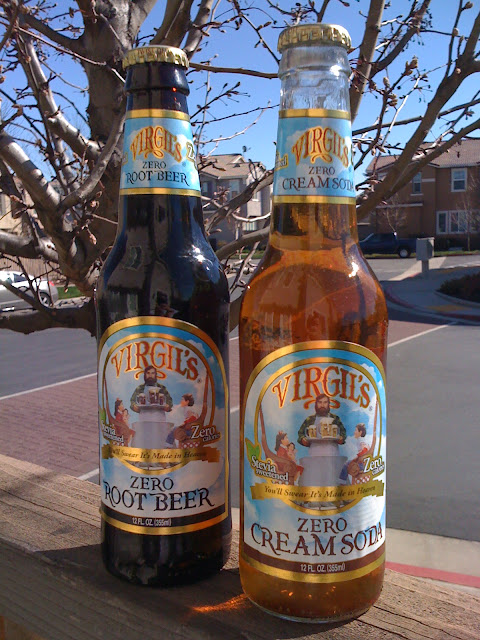 This was a hard review to write, as I am not a diet soda drinker. Virgil's Zero Root Beer and Zero Cream Soda are just that, and it is not going to be easy to review them fairly...or will it be?

I am a huge Reed's Inc. fan because of their amazing products. Reed's Ginger Brew lines and Virgil's Root Beer and Cream Sodas are on the short list of my favorite soft drinks. I've talked about Reed's Inc. before in November of 2009 and in December of 2009. But this is going to be a different and difficult review because I am a soda fan, not a diet soda fan. I've always said that diet sodas shouldn't even be made. Why? Because they taste nothing like the original beverage they are supposed to be similar to (except for Diet Dr. Pepper). In fact, most people that like Coca-Cola tell me they like Diet Pepsi better than Diet Coke. And the same for Pepsi fans; they usually say they drink Diet Coke first.

Virgil's Root Beer is one of the best root beers out there. It's brewed by Reed's Inc. using natural ingredients from around the world, and it IS "So Rich and Creamy You’ll Swear it was Made in Heaven", as their slogan goes. Virgil's Zero line of sodas are made naturally too, just like the regular line, but with zero sugar and zero calories.  Because my wife recently put us on a low sugar, low carbohydrate diet, I've been looking for alternatives to sugar based foods and drinks. This so-called "life style change" she has us on only allows for only 15 grams of sugar a day and 6 servings of carbs (a serving is considered 5-20 grams of carbs).  Enter Virgil's Zero Root Beer and Zero Cream Soda.  These all natural diet sodas are made with natural stevia, a sweetener with no calories.  It is a decent alternative sweetener because it is natural, not a chemical like sucralose, saccharin, and aspartame.   Just like all alternative sweeteners, however, stevia does not taste like sugar and has an aftertaste. So on to the review. 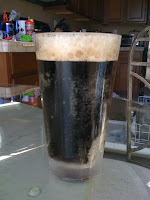 Virgil's Zero Root Beer
Like the original, Virgil's Zero Root Beer is creamy, with a vanilla and Birch root bite.  Its initial smell and taste are that of a fine root beer, similar to the original.  But, once I swallowed the root beer and the sweetness of the soda on my tongue was able to react with the air in my mouth, the familiar aftertaste that all alternative, diet sweeteners leave.  It was disappointing.  And because I've been on this low sugar diet for almost two weeks now, I'm more use to the stevia aftertaste.  But it was not a nice finish to the Virgil's Zero Root Beer.  Now, diet soda drinkers will probably think it's something they can deal with, after all, they drink other diets with the aftertaste issue and other harmful chemical issues too.  At least with stevia there are not health concerns. But for a true soda fan, it was not the finish I was hoping to have from a soda company like Reed's. 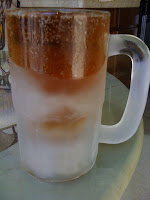 Virgil's Zero Cream Soda
Again, like the original, Virgil's Zero Cream Soda has a nice cream, vanilla, and caramel, start, with a sweet aroma and hints of other spices.  It first hits your mouth just like the original Virgil's Cream Soda.  But once the soda is swallowed, the aftertaste from the stevia ruins the finish.  I'm not really sure what to say here.  What is the point of a diet soda that tastes bad?  I'm talking all diets, not just these two.  Why do we have to gain weight for something as wonderful as sugar?  How do diet soda drinkers handle that lousy aftertaste that non-sugar sweeteners leave?  Is there not a way to make a sweet tasting cream soda with no calories and no chemicals?  Is there not a way for us to enjoy a beverage, without the sugar content causing us to gain massive amounts of weight?  I was so hopeful and now I feel like giving up on the diet thing.  It's not worth not enjoying my favorite beverages.

Conclusion
I really don't want to say anything more.  As a fan of the company and their regular sugar based soft drinks, it is hard to say something that feels harmful or hurtful.  They make amazing drinks.  And these diet drinks are probably great in comparison to other diet soft drinks, but I can not endorse them.  I can not say that the Zero line is good.  I think it is something that could be a work in progress; maybe with some adjustments to the stevia levels the drink would turn out better (reduce, less may be more).  But the current formula did not work for me.  And again, I'm not, never have been, nor ever see myself becoming, a diet soda fan.  Maybe that makes my review unfair, but I had high hopes for this and it didn't live up to those dreams.

Sorry Reed's, Inc.  I am still a huge fan of the regular sugar line of soft drinks.  You make a premium line of sodas and I love them.  I've talked about wanting to work for you, own your stock, and promote your products.  I hope this review doesn't hurt too bad, as I did not expect this when I promised my readers a review.

Email ThisBlogThis!Share to TwitterShare to FacebookShare to Pinterest
Labels: Food and Beverage