The Baby Birds That Fell From The Tree 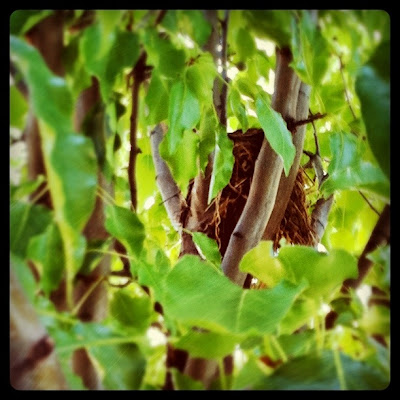 The Nest
I arrived home to my awaiting family this evening, greeted at the door by my two beautiful boys, kissed by my wife and welcomed home from my long day at work.  My wife had prepared the dinner, and all but the meat was ready for consumption.  I knew my grilling expertise would be required for the handmade burger patties waiting on a plate.  I needed to fire up my barbecue.  As I opened the sliding glass door leading to the patio, I hear a scratching noise coming from some boxes.  The boxes, left over from the bunk beds we build last weekend for my boys, were stacked against the fence line of the patio.  I cautiously approached the boxes, not sure what I was going to find trapped within.  I carefully peered into one of the boxes and saw a little bird, which I assumed was unable to fly out due to the narrow walls and the depth of the box it was in.

I decided, in case it was sick or injured to the point of an impending death, I would lift the box over the fence and dump the bird onto the soft bushes on the other side.  This would also allow the bird to perch atop the bushes for an easier takeoff, once the shock of the ordeal wore off.  What I didn't notice was the large hole at the top of the box, which caused the little bird to fall out of the box and into my arms, and then onto my patio slab.  It hopped around the patio, scared and searching for a safe place to hide from me.  (Now, I'm not going to lie.  I let out a little sound that any good, startled person would emit.  Okay, I slightly screamed.)

I ran casually strolled into the house to tell my wife what had just happened.  I formed a plan of how to get this little bird out of my tiny backyard.  I decided to use a broom, not to push the little thing, but to guide the bird out of the side gate and onto the sidewalk.  The plan worked perfectly.  The little bird found its way into the landscaping in front of our residence.  And then, the most amazing thing happened.  The mother bird arrived.  It was then that I realized this little bird was actually a baby, who had fallen from its nest.  The mother began calling to the baby bird as though to say, "Spread your wings little one.  Fly.  Fly."  The moment was almost precious, nature at its purest. 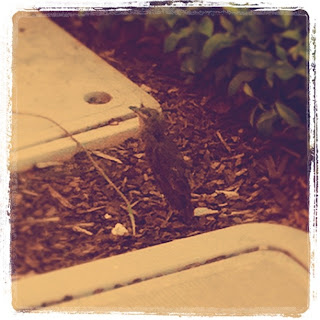 Nature at its purest
I ran into the house again, this time to tell my family of the little storybook scene unfolding in front of our home.  The boys ran to the front window to watch.  My wife gently reminded me of my original purpose for going to the patio.  I decided to sneak another peak at the reunited baby and its mother, of course, after I started the grill.

As I approached the grill and began to remove its cover, I could hear myself screaming again found myself startled again.  Another baby bird was on the patio, this time waiting to jump out at me as I removed the cover from my grill.  This little one knew the escape route and took it, passing my jumpy legs and heading for the hole under the gate and on to the freedom its sibling found.  The mother bird screeched at this little one too.  "Fly children. Fly," she said.  She hopped up, and adding a quick thrust of her wings, landed herself on the lowest branch of a tree.  "See children, it's that easy.  Try it.  You can do it," she was diligently calling to them.  She knew it was not safe down on the ground.  "Squawk Squawk"!  She showed them a few more times.  God's creation is amazing. 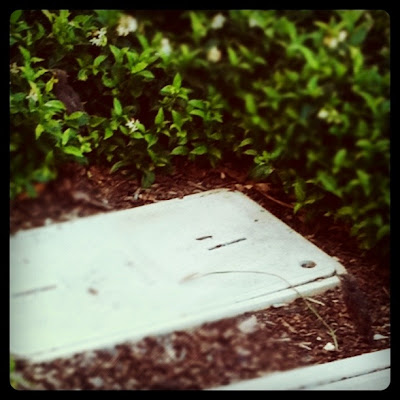 Where's Waldo?  There are two birds in this picture.  Can you find them?
Realizing I needed to cook up some amazing burgers (which I know were amazing because I'm writing this hours after eating them.  It's not bragging if it's true), I turned and started the grill.  While it warmed and I began to comprehend the horror that will ultimately become those baby birds' last day if they don't get the flying thing down, I realized I'd better go wash my hands before I touch any of the burger patties my wife so lovingly prepared for our dinner, you know, just in case I got bird on me.

I think the moral is clear here.  Have a point to your stories or you'll just end it with everyone wanting to wash their hands of you.  So good night, and thanks for reading.

Email ThisBlogThis!Share to TwitterShare to FacebookShare to Pinterest
Labels: Crazy, Rant or Ramble