Autoblog Takes Away My Thunder...VW Microbus

I started writing this post yesterday, but I was on kid duty and ran out of time to finish it.  Then today I see that Autoblog tweeted about VW's design chief saying a new Microbus is in the cards.  While that announcement is SOOOO exciting, it takes away my thunder.  But, I'm still posting this because I know my loyal fans need something new to read, as my blog has been lacking entries for a few weeks now.

Why don't I know how to use Photoshop? I need to know how to use it. I have so many ideas (I think are great) for vehicle revisions. Take Volkswagen for example. They created the Microbus in the 1950's. Now, they've moved to a modified Dodge Caravan, completely losing their focus on European design and ingenuity. Why? Because they think Americans want more crap? I don't know. But Dodge was sure not the way I would have gone. Look at the original Microbus or "Bus" as so many people call them. 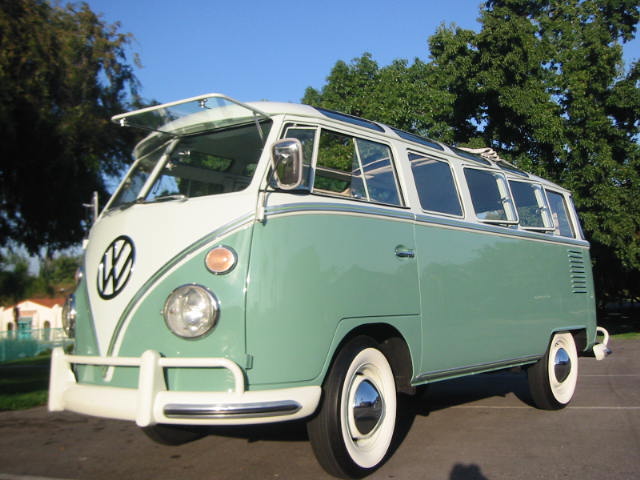 This is a totally cool looking van. If it was modernized, like the Beetle (or "Bug") was, the Microbus could take a whole segment of vehicles retro and make the "minivan mom's" seem cool again. Nissan and Toyota redesigned their vans, but VW has the retro game down.  And, because VW has the nostalgia of the Bus, they could get away with some really cool things.  A few years back, they did come out with a Microbus concept, but it didn't take off for a few reasons. 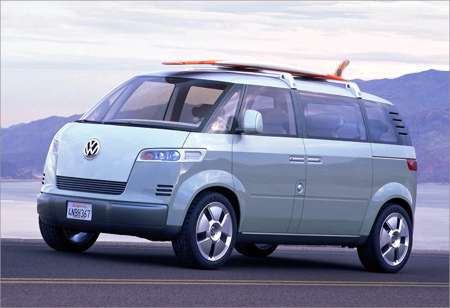 First, VW did not do a great job with the headlights.  The original are round, not thin slices.  I'm not sure I would want the same style as the original, but something that is reminiscent of the old style would work better.  Here is why the round doesn't work: 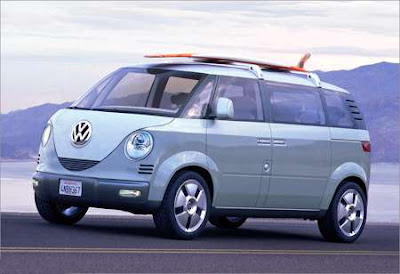 Second, although pushing the wheels out to the edges is one of the things I love about VW's, this concept pushed the wheels beyond the outer edge to where they had to design fenders that popped out too far too.  Also, the rear wheels seem to be falling off the back of the van. 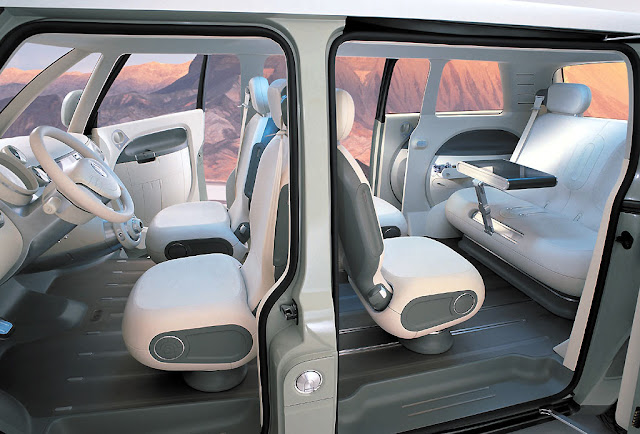 I'm not sure about safety issues or why the engine can't be in the rear, except for the fact that this would never be built as a rear wheel drive vehicle, but it would be awesome if they built it that way.  If they did this, they could  push the driver forward even more, giving that "no nose" front end to the van.  Again, safety standards today may require a crumple zone in front to provide protection for the driver and front passenger, but I just wanted to mention it.  In reality, this is going to be a front or all wheel drive vehicle and the engine placement would work better in the front.

VW did have the Vanagon and the Eurovan, which were both pretty unsuccessful here in the USA, but they are more true to VW style than the current Routan, which is based on the Dodge Caravan.  The Vanagon and Eurovan were more boxy than rounded like the Microbus, but they had some of the VW interior queues that made these vans really practical.  This van still exists (not here in the USA) and its latest form is shown in these two pictures (silver is standard, black is customized).  I actually like these as a starting point for the new Microbus. 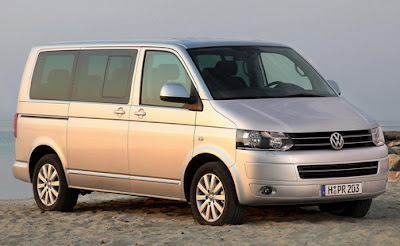 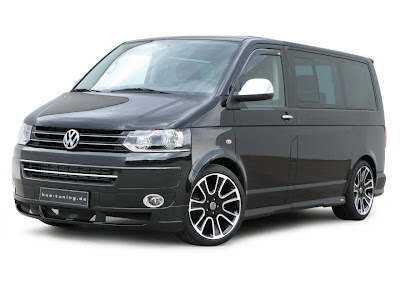 Finally, I'm not going to hold my breath for the new Microbus.  I've talked about it before and it hasn't happened yet.  I think the concept came out in 2001.  And now, here we are 10 years later and we have a Dodge Caravan to show for it.  Yuck!  So here's my standard letter to the company, as though they read my blog:
Dear Volkswagen,
First let me say, I learned to drive on a 1976 Diesel Rabbit,  I purchased a 1999 VW "New Golf" as my first new car purchase, and I'm now wishing I could replace my '99 (which is over 190K miles) with a 2011 Golf.  I love your company.  I believe you know how to make vehicles that are fun to drive.  I believe you know retro.  I think that American's love retro too.  The Beetle was a success, and other companies have had huge success with retro designs as well (Ford Mustang, Dodge Challenger, Chevy Camaro).
It's time for a Microbus, one for those of us who need the capabilities of a van without all the ugly minivan stereotypes.  The VW Microbus could be that answer.  Take design queues from the old Microbus with modern family traits from today's T5 model.  Make us a retro style Microbus that no one will consider "just another minivan."
Do it right VW.  Do it well.  Make me proud to be a fan, a family man, and a future Microbus owner.
Sincerely,
Jimmy the Gun