In Hopelessness, I Shall Seek Out The Word 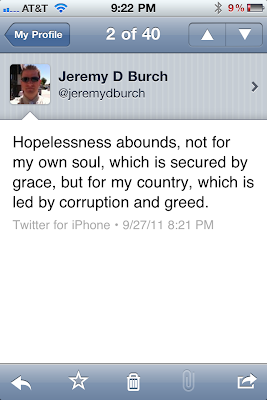 I'm not going to pretend to think of myself as deep.  In fact, I'm a shallow fool who desperately needs God's grace to cover a multitude of sin, that otherwise earns me eternal damnation, separation from God, and torturous everlasting death.  Eeek.  But I tweeted tonight about hopelessness, and how it abounds exponentially with the leadership of this country (I may have said it differently due to the 140 character limitation).  This tweet, which I felt I needed to share, led me to this blog post, which, again, I felt I needed to use to explain the hope that is in Jesus Christ who is the Son of God and who is God.

I titled this post "In Hopelessness, I Shall Seek Out The Word" to be creative with it.  I decided to share the following verses tonight because I've had this on my heart since reading them with my kids.  We started a family devotion time after our July family vacation to Newport Beach, CA with my mom's side of the family.  It was awesome!  My mom's brother, a pastor in Georgia, sat everyone down the first night and explained he thought we should all do a "family devotion" each night of the trip, just after dinner, for 15-20 minutes.  At first, I was a little bothered by what felt more like a demand than a suggestion, but I quickly realized this was going to be one of the major highlights of the trip.  And, it turned into something I felt was important to my family's spiritual health.  Anyway, I've written about this vacation before, so I'm just going to move on and explain my title.

"I Shall Seek Out The Word".  Really, "The Word" is a name John uses for Jesus.  John, the book of the Bible I decided to read with my family, starts with:


1:14 "And the Word became flesh and dwelt among us, and we have seen his glory, glory as of the only Son from the Father, full of grace and truth."

When I'm feeling hopeless, I need to seek out Jesus.  Why?  Because He is God, Creator, Life, Light, Grace, and Truth.  He created us and gave us life and light.  Then he came to earth and provided a way for us to not be hopeless in a sinful world, giving us grace and THE truth of Himself.  Jesus existence is not disputed in history.  He really lived as flesh and dwelt among us.  Only His sovereignty is disputed.  The unbelieving deny the life and light that His glory gives.

3:16 "For God so loved the world, that He gave His only Son, that whoever believes in Him should not perish but have eternal life.  v17 For God did not send His Son into the world to condemn the world, but in order that the world might be saved through Him.  v18 Whoever believes in Him is not condemned, but whoever does not believe is condemned already, because he has not believed in the name of the only Son of God.  v19 And this is the judgement: the light has come into the world, and people loved the darkness rather than the light because their deeds were evil.  v20 For everyone who does wicked things hates the light and does not come to the light, lest his deeds should be exposed.  v21 But whoever does what is true comes to the light, so that it may be clearly seen that his deeds have been carried out in God."


I can't really say it more clearly than this.  I tried, but I deleted what I wrote because it was not as precise.  Be encouraged by God's words. All of 3:16-21 is Jesus speaking to Nicodemus about salvation.  It's God's own words.  The words of The Word.