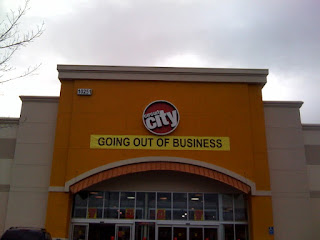 I meant to post this on Saturday but it was so uneventful I forgot.
Don't waste you time looking for deals at circuit city. They aren't
good. In fact, there were still CDs and DVDs for $20+ and only 10% off
computers.

I did play with the blackberry touch screen phone a little and it is
no good. Even though I'm starting to hate the iPhone and even apple as
a company, the iPhone is still better than that phone was. The "click"
they talk about in their commercials is the screen actually moving
backward when you press on it. It's supposed to get you a tactile feel
but I think it just made it seem cheap.

Back to CC going out of business, I guess the person in charge of
selling all their stock thinks he can get suckers to buy stuff
thinking they're getting a deal. Well friends, don't be fooled.