Why Big Government is Bad

That is a huge title for this simple little post. But let me explain. New legislation requiring vehicles to reach a fleet average of 35 mpg by 2020 has automakers talking about drastic changes to the vehicles they build. Things like V8 engines are being replaced with smaller, less powerful 4's and 6's. The Hybrid engines are "all the rage" right now and are being built and put in everything form sedans to the work trucks. If you've ever driven a Hybird, you know that a work truck may not work hard enough with one.

But where am I really going? I don't so much care about the big work trucks and their powerful V8s. I like cars that remind us of the heritage of auto-making. The retro cars have been huge successes. The VW Beetle, the Dodge Charger and Callenger, and the hype surrounding the 2009 Camero are a few redesigns getting high praise. The problem comes when a dream is not realized because the government puts restrictions on auto-makers they are not ready to meet.

Before I continue, I will admit I'm torn in this issue. If you will recall, I posted a video from the 1982 Datsun Nissan truck boasting or 31/43 city/hwy mpg. And now Nissan's newest trucks, with 15 years of advances, can't come close to that.

An announcement made today by GM, to GMC, Pontiac, Buick dealers sounds like the Trans-Am, based off the 2009 Camero platform, may not come to fruition. GM is basing this decision on the fact that the 2020 legislation would require GM to build more high mpg vehicles for the Pontiac brand, if they placed a muscle car like the Trans-Am in the line-up.

OH MY GOODNESS. Do you know what this means. The new Knight Rider will have to be a Mustang or something. What's that? It is a Mustang? Well, what about The Bandit? What will Burt Reynolds drive to escape the Smokeys? Well, it could have been this car. 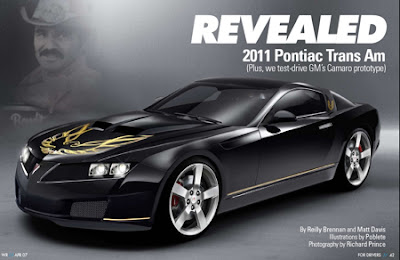 I know, the technology should be there for the automakers to produce a clean, high mpg, powerful vehicle with so many advances over the last, let's see, just picking a number out of the air...... oh I know....15 years. The problem is largely due to all the corruption in the government, auto-makers, oil companies, and auto unions. Plus, most citizens are not informed well enough to vote for the right people to represent our wants, needs, and dreams (me included).

Who am I? I'm trying to be all political and stuff.(valley girl voice)

So I'll return to some sort of normalcy for my blog. I really think the Trans-Am would make a killing if it looked like the rendered drawing above. I think the new Knight Rider would have been a perfect opportunity to JUMP on and build this great machine. Ford bought the spot for the Shelby GT500KR Mustang. It's a sweet retro car too. It's just not KITT.
Posted by James Guhn at 3:50 PM