My Test Drive Of The 2011 Volkswagen Golf TDI

There was a point in my blogging when I thought I'd do more reporting on cars and my own opinions and impressions; including test drives, looking at statistics and specs, and being more honest about a vehicle then the sponsored car magazines and blogs.  Then I realized, I don't have time, money, or that much talent.  I have to hold down a real job, love on my family, and live a real life away from the computer.  Plus, if the manufacturers are giving you a vehicle to test drive, it's not a quick loop around the AutoMall.  When you have the vehicle for a few days, as part of your daily routine and job functions, you can really get into the handling and drive of the vehicle and write a really great (although sometimes wordy) review.

Well yesterday, after a Costco visit that went horribly wrong, where our Christmas Eve tri-tip was paid for but never made it home, I went to the AutoMall after retrieving a new set of tri-tips (I say "set" because it's Costco and you can't just buy one of anything).  I was originally going to check out the new 2011 Ford Explorer, as we are in the market for a bigger, more practical, family vehicle, but on my way around the AutoMall loop, I thought about the Gilt.com 2011 Volkswagen Jetta sale (a genius marketing idea by VW) and decided to stop at the VW dealer.  And, while my intention was to check out the Jetta, the salesman asked enough questions to realize if I was actually in the market to buy a VW, it'd be a fuel efficient commuter for myself.  He asked if I'd heard about TDI, Volkswagen's clean diesel engines. Of course I had, but I had never driven one. 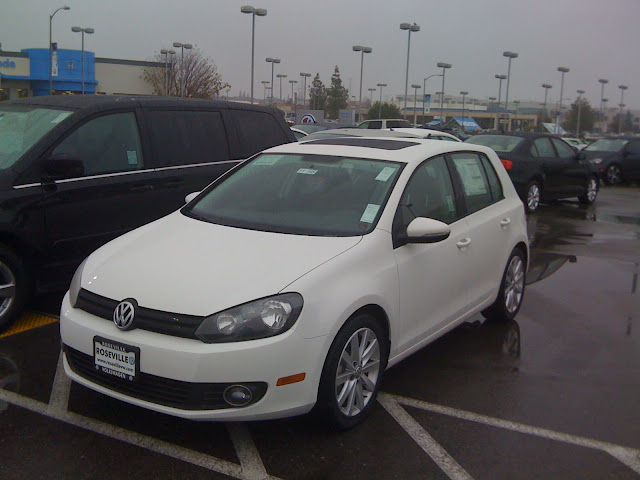 This was the Golf TDI on the lot for me.  This was the only 4-door TDI on the lot, in white, with a manual transmission, and well equipped.  It had a sunroof (I don't need), fog lamps (cool), and a rear spoiler (sweet).  It had the European style turn signals on the side mirrors and a cool feature where it gives the driver 3 blinks of the signal if a tap to the signal switch is made, rather than a full push into the on position.  It had Bluetooth that worked with my iPhone for calling, and more importantly it integrated with the iPod features.  That was great, an they still make a really great sounding stereo.  I could play music right through the car stereo, without wires or any additional configuration beyond syncing with Bluetooth. 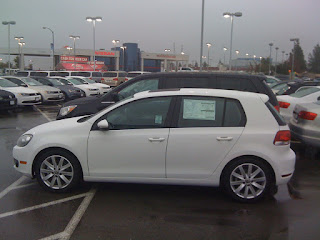 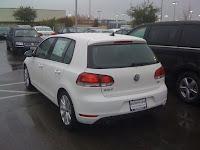 The Drive
We took it for a spin.  Because I understand diesel is more about compression than lighting the fuel on fire, I expected it to be a little slower to respond.  Well...it was and wasn't.  The initial provision of fuel at take-off seemed to be an issue for me.  I stalled it twice in a row.  It seemed like I had to really stomp on the gas pedal to get enough diesel into the engine for take-off.  BUT, once I figured out the take-off (and I do drive a manual transmission every day so I know what I'm doing) the car got up and moved.  I loved the quickness of this car.  We were able to take it onto the freeway and I got up to speed with ease.  I did miss the instant "push you back into your seat" feeling my 1999 VW Golf 2.0 gasoline engine still provides, but I believe that's the diesel way.  I'm not saying it wasn't quick, there just wasn't the instant push.  I think it would still beat my '99 in any type of race. 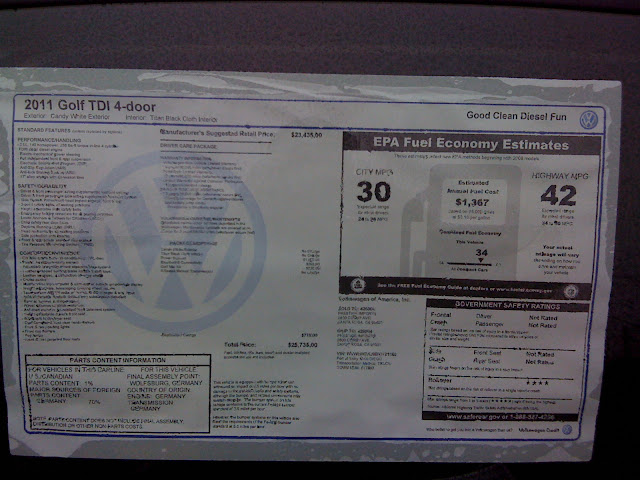 The Verdict
Would I buy one if I had the money?  I think not.  For the price of $23,435, I'd look at a GTI or wait for the Type R that is coming.  Although the Diesel has been an interesting idea to me, the fuel savings does not afford the sticker increase.  It was a nice drive, but the instant push of a gasoline out weighs the fuel savings in the end.  Sure, my '99 is 11.5 years old, meaning I'd be into the money savings period now with the TDI, but the 9.5 years of less "get up and go" a TDI would provide would make me regret the decision.

One last thing about Volkswagen: I love them and their vehicles.  They look great, drive amazingly, get great mileage, and have some nice extras.  But they are all over-priced. I mean, they are consistently several thousand dollars over their class equals.  The 2011 Jetta is a trend towards fixing that pricing gap, but Volkswagen started as the people's car, affordable and simple.  I think they need to work harder towards returning to those roots.  Like I said, the 2011 Jetta is a start towards the pricing correction, but the rest of the brand needs to make similar moves.