Top Gear USA On The History Channel...and A Rant About Internet Video Availability

First, let me tell the History Channel people that they need to free up some of the video on their site.  I wanted to embed a video of an awesome, hilarious, and super entertaining scene from an episode, but they didn't allow the video to be embedded.  Why not have some of the scenes or episodes available for embedding?  I'd be free advertisement.  Check out a small portion of the episode here. 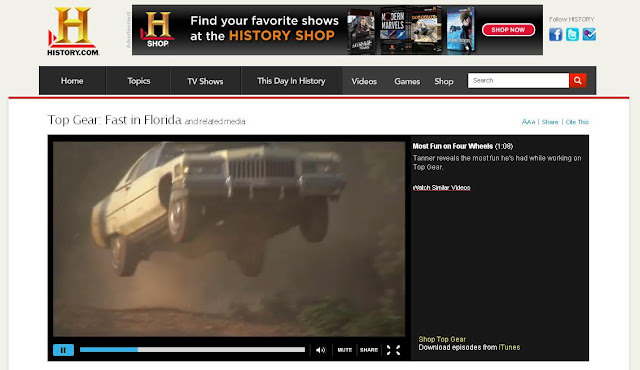 Anyway, the episode (#3) I just watched using my DVR so I could skip commercials, earning The History Channel $0.00, had a bootlegger challenge with the hosts.  The 3 hosts each had to buy a car for $1,000 (I think) and run moonshine through a set of challenges that were designed to mimic the challenges the original moonshiners faced.  This episode was really funny and amazing to watch.

I actually want to support the show.  I want the morons at the History Channel to realize they hurt themselves by not having web content of their shows.  Embedding and allowing a site like Hulu to stream episodes is a great way to continue to make money off of the show.  AND, web content makes me watch at least one commercial every break.  You can also set up embedded codes that first play a commercial before playing the clip.  This seems like a no brainer to me.

This is actually about to start a rant on how all the major networks keep pulling away from the Internet, streaming, embedding codes, and even the Google TV idea.  Why?  This doesn't seem like its a good business idea.  A site like Hulu forces the viewers to watch commercials.  Currently, I use a DVR to watch TV.  I never watch live TV because I refuse to watch commercials.  The Internet figured out a way to make me watch them again.  But, it's done in a bearable way.  The streaming sites make you watch one commercial at the beginning, which matches the other ads on the site.  Then for longer shows or videos, they add just one commercial per break.  It's short and sweet, and I do watch them.  Currently, the sites Funny or Die and Fail Blog are playing commercials for the Duramax Diesel engine and the Allison transmission that are in the Chevy Silverado.  SEE History Channel?  That's from embedded videos and streaming content.  See that major networks?  That sponsor got their money's worth.  If the Internet was utilized, advertisers would see the rewards from views.  This would drive the cost of Internet advertising up and the networks could charge more for this type of ad, MAKING THEM MORE MONEY.  Instead, every network thinks they can do it better than the next.  No one is seeing the benefit of using a site like Hulu to be the go to Internet place for video.  And don't get me started on Netflix.

Well, there's my spontaneous rant.  I really just wanted to tell my readers to watch Top Gear USA.  It's actually pretty good, even if the hosts are all really cheesy.  Night!