Apple says, "Your iPhone gets better with every iOS update...iOS4 is available for iPhone 3G." 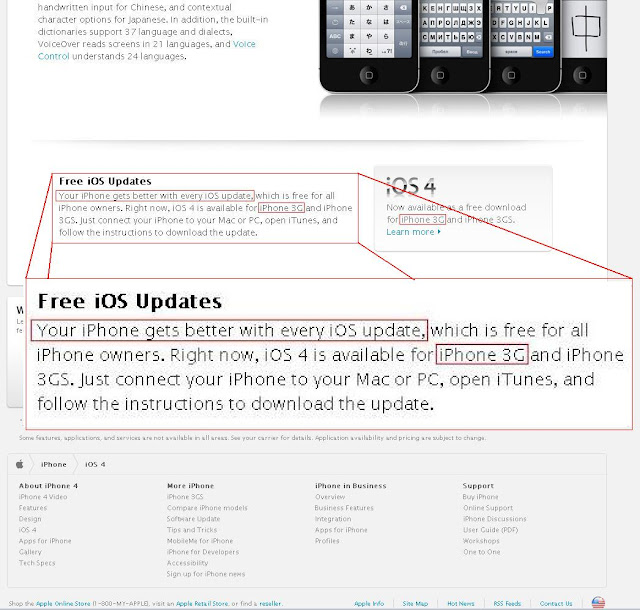 I upgraded to iOS4 on my iPhone 3G.  It was a mistake.  It's not better.  It's so much worse.  This is false advertising in my opinion.  I wish so badly there was a way to go back (I mean an official way).  Apple doesn't take care of its existing customers.  This is why I haven't purchased the iPhone 4.  I know it's a great phone right now...I mean, besides all the issues that have been publicized.  But what about a year from now?  What about 2 years from now?
Here is a video showing some real problems caused by "updating" an iPhone 3G to iOS4.  I've actually experienced all of these problems and more.  The other day it took 22 seconds to load the Apple Store app.  That's 21 seconds longer than it took my friend to load the same app on his iPhone 4.

Then, there is Apple's handling of the issues with the iPhone 4.  Sure the people who are using the iPhone 4 are not reporting the issues like the media is trying to make it seem, but there is an actual issue with the design.  The antenna IS affected by the way the phone is gripped.  There is also the proximity sensor issue; supposedly this is being fixed by the latest iOS update (4.0.1).  Apple did have a press conference to talk about the issues, but they started the conference with this video:

I laughed at this video, but part of me thinks it's Apple's way of thumbing its nose at the complainers who are pointing to REAL issues, no matter how slight.

Apple is going to provide free bumpers or cases to iPhone 4 purchasers, so they are making good on a fix for the antenna issue (apparently).  And if the iOS 4.0.1 fixes the proximity sensor issue, Apple will have made good on the main issues.  But, why did they want to go through all this bad press?  They knew about the antenna issue.  They had to have known.  They can deny it as much as they want, but they knew.  I'll always believe it.  Heck, they had the bumper designed well before the antenna issue was publicly outed.  It wasn't even a day later that users were posting videos and complaining.  Apple was working on it for a while (I've read longer than a year), including a testing stage that would have revealed these issues.

Also in their press conference, Apple tried to point to other handsets and these devices' issues.  This was a deflection that ticked off RIM (maker of Blackberry) and others.  Just own up to your own issues, Apple!  Don't try and say, "well, every body else designs phones with problems.  Why can't we?" (I'm paraphrasing, of course).  RIM's Co-CEOs published an awesome statement:

"Apple's attempt to draw RIM into Apple's self-made debacle is unacceptable. Apple's claims about RIM products appear to be deliberate attempts to distort the public's understanding of an antenna design issue and to deflect attention from Apple's difficult situation. RIM is a global leader in antenna design and has been successfully designing industry-leading wireless data products with efficient and effective radio performance for over 20 years. During that time, RIM has avoided designs like the one Apple used in the iPhone 4 and instead has used innovative designs which reduce the risk for dropped calls, especially in areas of lower coverage. One thing is for certain, RIM's customers don't need to use a case for their BlackBerry smartphone to maintain proper connectivity. Apple clearly made certain design decisions and it should take responsibility for these decisions rather than trying to draw RIM and others into a situation that relates specifically to Apple."


Finally, I do need a new phone, mostly because of how JACKED my phone is since updating to iOS4.  I'm still not sure what I'm going to do.  I loved my iPhone for the first year, then it went down hill.  I love the features of the new iPhone 4, but next year when 5 comes out, I know Apple's business plan is to screw the previous phone owners.  Android has so many options, just not on AT&T's network.  ARGH.  This is tough.

UPDATE: The Unofficial Apple Weblog wrote a story about this very issue.  I hope a blog as large as that one will help get Apple's attention about this issue.  Knowing arrogance, there will probably not be a great fix.
Posted by James Guhn at 2:24 PM

Email ThisBlogThis!Share to TwitterShare to FacebookShare to Pinterest
Labels: Apple, I'm So Mad