UAW STRIKES Again...Trying to Get Toyota to Unionize 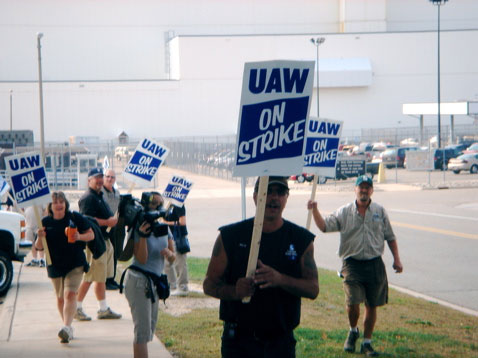 I linked a story under my "More Stories" section about the United Auto Workers Union's (UAW) plans to have union workers "strike"...or hold banner up at Toyota dealers in California and New York. I hope that Toyota doesn't break under this little bit of pressure. The UAW is a major reason for GM's issues. Their power over policy makers, over the companies that employee unionized workers, and their excessive entitlement mission have caused so much damage to this country's automotive industry. Their purpose has long been over stayed. Sure, workers were abused and misused in the past. But there are now laws, thanks to the unions, that protect the workers. Now, all they do is weaken this country by demanding "rights" for the workers that are excessive and unnecessary.

Anyway, don't support unions. I love that Tesla is planning on opening Toyota's NUMMI plant here in California, BUT not as a unionized plant. They even went as fat as to say they would work to hire those employees who were laid off, but not under a union contract. Good luck Tesla. And stay strong Toyota.
Posted by James Guhn at 8:50 PM