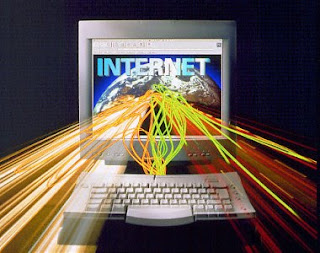 Key milestones in the development and growth of the Internet:

1969: On Sept. 2, two computers at University of California, Los Angeles, exchange meaningless data in first test of Arpanet, an experimental military network. The first connection between two sites - UCLA and the Stanford Research Institute in Menlo Park, Calif. - takes place on Oct. 29, though the network crashes after the first two letters of the word "logon." UC Santa Barbara and University of Utah later join.

1972: Ray Tomlinson brings e-mail to the network, choosing "at" symbol as way to specify e-mail addresses belonging to other systems.

1973: Arpanet gets first international nodes, in England and Norway.

1988: One of the first Internet worms, Morris, cripples thousands of computers.

1993: Marc Andreessen and colleagues at University of Illinois create Mosaic, the first Web browser to combine graphics and text on a single page, opening the Web to the world with software that is easy to use.

1994: Andreessen and others on the Mosaic team form a company to develop the first commercial Web browser, Netscape, piquing the interest of Microsoft Corp. and other developers who would tap the Web's commerce potential. Two immigration lawyers introduce the world to spam, advertising their green card lottery services.

1996: Passage of U.S. law curbing pornography online. Although key provisions are later struck down as unconstitutional, one that remains protects online services from liability for their users' conduct, allowing information - and misinformation - to thrive.

1998: Google Inc. forms out of a project that began in Stanford dorm rooms. U.S. government delegates oversight of domain name policies to Internet Corporation for Assigned Names and Numbers, or ICANN. Justice Department and 20 states sue Microsoft, accusing the maker of the ubiquitous Windows operating system of abusing its market power to thwart competition from Netscape and others.

2000: The dot-com boom of the 1990s becomes a bust as technology companies slide. Amazon.com, eBay and other sites are crippled in one of the first widespread uses of the denial-of-service attack, which floods a site with so much bogus traffic that legitimate users cannot visit.

2004: Mark Zuckerberg starts Facebook as a sophomore at Harvard University.

Email ThisBlogThis!Share to TwitterShare to FacebookShare to Pinterest
Labels: The WWW